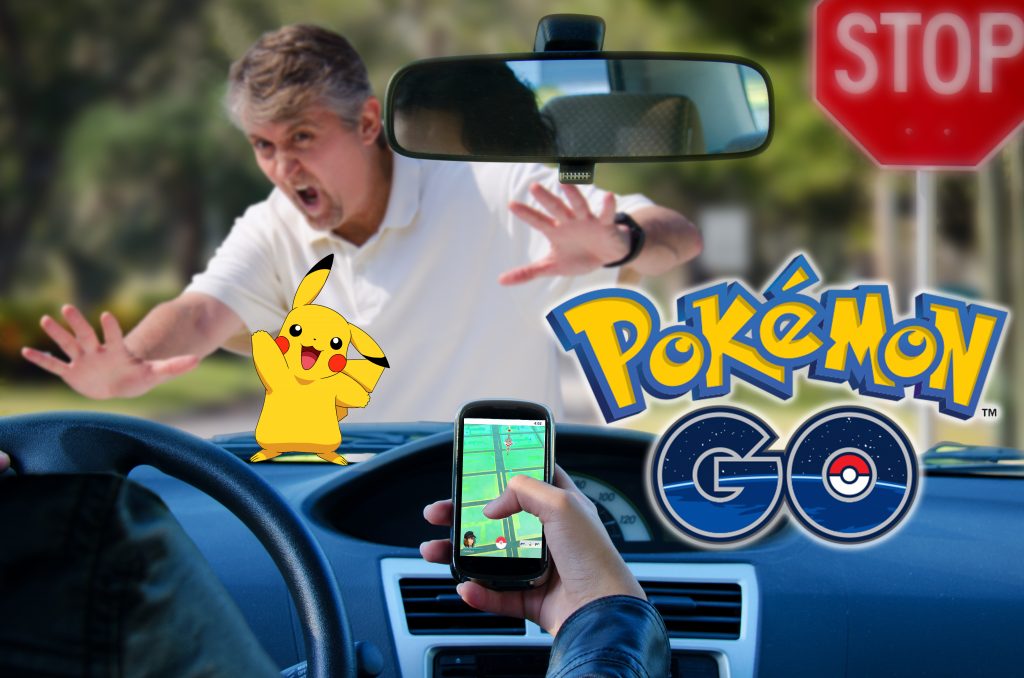 An irresponsible Pokemon Go driver is about to run over a pedestrian while trying to catch a Pikachu.

The days of people peering into their phones consumed by Words With Friends, Tinder, or Candy Crush have finally been replaced by the advent of the newest handheld game craze—Pokemon Go! It seems like you can’t even grab a cup of coffee without running into someone flicking a Pokeball or trying to catch a scurrying Pikachu. The craze has swept the world and is quickly becoming our new national obsession. Although like any other distracting cell phone activity, it is also generating its fair share of problems—especially for those behind the wheel of an automobile. In Baltimore, a Pokemon player actually ended up driving his automobile into a parked police car (see https://www.cnet.com/news/pokemon-go-player-crashes-suv-into-parked-police-car/). Although wrecks like these remain rare, it is likely they will continue to endanger the drivers and commuters of our roadways for years to come.

Pokemon Go is also creating problems in the purview of one’s property rights. A class-action lawsuit in Michigan has recently been filed by Jayme Dodich of St. Clair Shores alleged that the game illegally places Pokestops and PokeGyms on private property without the landowner’s consent. This represents some of the first new cases that have been filed in an undiscovered area of law surrounding “virtual” rights… that is, if any such thing actually exists! However, it does race some well-litigated issues like trespass and landowner liability. It may even be the case that Nintendo/Niantic is found to have created an attractive nuisance or dangerous condition on one’s real property. Whatever the case may be, we at The Bruner Firm will continue to monitor this new area of law and will be prepared to fully litigate and cases involving distracted driving or Pokemon Go.

How to File a Personal Injury Lawsuit

A personal injury lawsuit can be challenging to handle. You must follow various state laws and legal procedures. Hiring an

How Do Helmet Laws Impact Fault in a Bike Accident?

Bicyclists face significant dangers when sharing the road with motor vehicle drivers. Since bicycles are smaller than cars and trucks

What Not to Say to an Insurance Adjuster

The immediate aftermath of a serious car accident is overwhelming. Most people experience a state of shock that can take